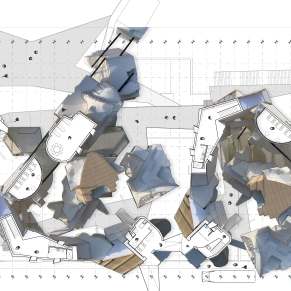 The area of South Los Angeles presents a particularly distinct edge condition between its industrial and residential zones. The Culture Monster is an intervention which straddles this boundary and begins to create proximities and previously un-allowed conditions for uncommon programmatic connections to happen. From a distance the Culture Monster appears to be a monolith hovering just above the flat cityscape of Los Angeles, but upon closer inspection it is a permeable loose assembly of forms and in-between spaces. The Monolith is also a critique of the dispersed and networked nature of many of the design attempts to change an existing city. The Monolith is collection of acupunctural interventions, which still read as a strong urban form. The interventions are of a cultural nature – understood as daily, social and shared activities beyond the purely domestic or commercial/industrial found on the site. These functions occur not only within the seemingly hovering monolith but also in-between its underbelly and the existing roof-scapes. The forms are generated through the process of on-site casting and slip forming, the formwork structures and materials also becoming part of the architecture.